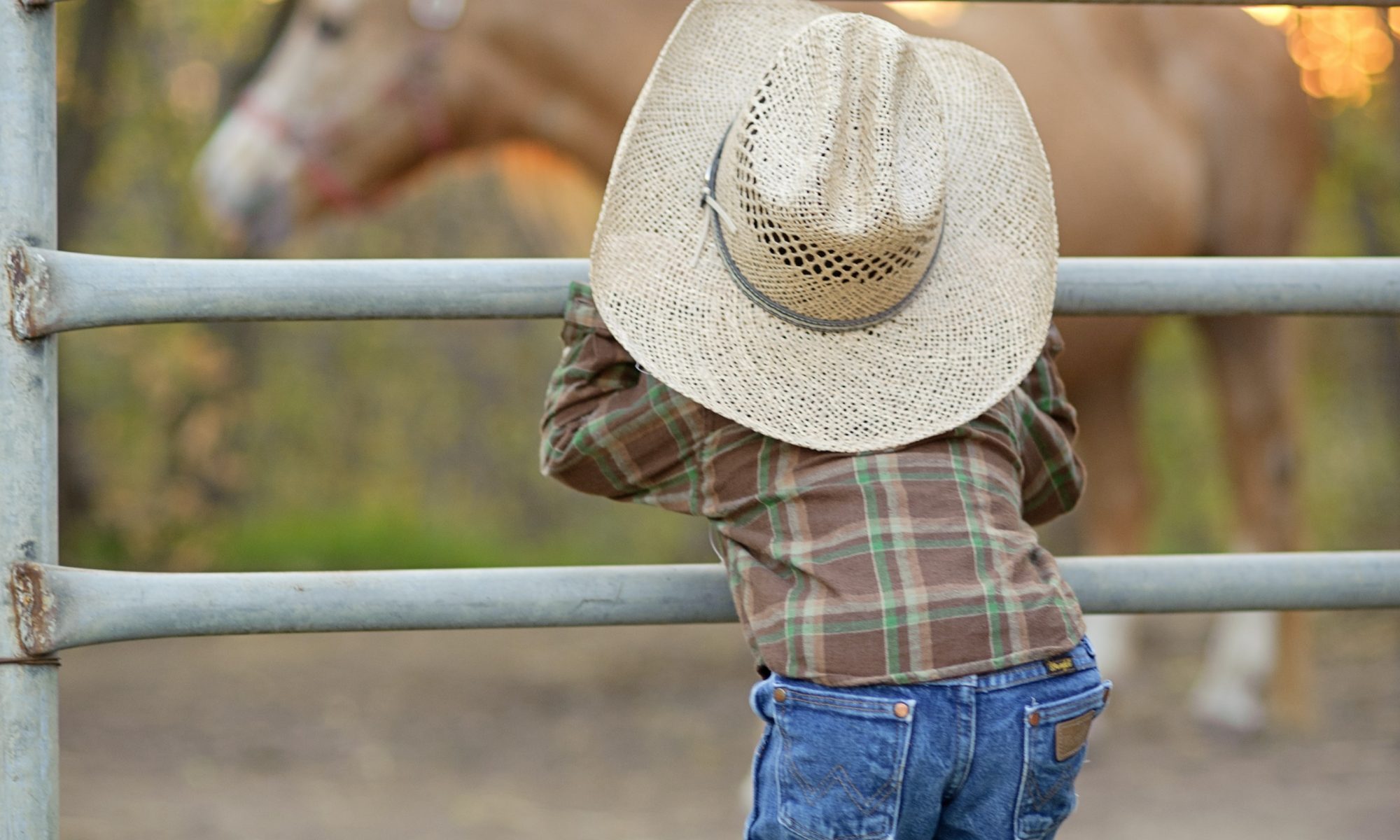 A little cowboy came to visit yesterday. Though Grandma was busy with her paperwork, there’s always time for a little visitor.

Daddy brought the little guy in his big pickup. When they arrived, there were some little undies on the front grill of his Daddy’s pickup. Daddy explained that Little Guy had an accident on the way and wet his pants. What was Daddy to do? Strap the wet undies on the bug catcher of his pickup to dry them out on the way over. Little Guy has a rather ingenious Daddy.

He came with a carrot in his little hand. He’d been nibbling on that carrot for quite some time. Grandpa said he had a cookie for him but he had to finish the carrot first. As soon as news of a cookie entered his little mind, the carrot was gobbled down in no time.

First off he had to put his boots on. Little Guy is quite a big guy; he showed Grandma that he can do it all by himself. Of course, they were on the wrong feet, but when your feet are small and your boots are big, it makes no difference. Once those boots were on, he was ready to go.

Grandma gave Little Guy 2 cookies–one for each hand. Armed with cookies, Grandma and Little Guy proceeded to count trees in the yard. He tapped each tree with his boot as he counted it. By about the third tree, Little Guy dropped one of the cookies on the ground in his eagerness to touch the bark on a tree.

Those little buds on the branches. I don’t think Little Guy believed Grandma when she said they would one day be an apple that he could eat. That is a miracle of God. Grandma gained an appreciation of the evergreen with it’s tender light green shoots. So soft, like Little Guy’s skin while the older tree branches are coarse and rough like her older skin.

It is incredible how our little, everyday tasks transform into important, new experiences for the little ones. We started by taking the compost out. On the way, we passed by a flowering cherry tree that is dropping its petals. Little Guy announced that he likes to step on them. His little foot aimed for the biggest petals he could find.

On to the compost . . . Did you ever think about what a delight is waiting to be had when you dump the garbage and watch it fall into the compost? Well, I never thought about it until Little Guy squealed in delight watching it fall to the ground.

The slide was next on his agenda. First time down his little bottom landed square on the ground with a thump. He decided Grandma must catch him when he goes down the slide. Now it’s Grandma’s turn to squeal with delight as she reached out her arms to catch Little Guy . . . “Ready, set, go.” Do it again. Helping Little Guy climb up the ladder, body quivering with anticipation as he scurried up those steps as fast as his little legs could take him.

Grandma was getting thirsty so they had to come in to make some lemonade. Grandma’s life is always busy. What a blessing to slow down and be “in the moment” as Little Guy requires an inordinant amount of time to take his boots off and struggle to open that heavy door. Next on the agenda–take out the cups to make lemonade. Deciding which cups to use–and why–takes time, then counting them, and gathering all the necessary supplies to make the lemonade.

With Little Guy’s help, everything was set to make the lemonade. He climbed up the chair, the cups lined up and counted, sugar, ice cubes, lemons, spoons on the table. Little Guy counted 2 ice cubes for each cup. Grandma put the lemon juice in each cup. Little guy added sugar. Grandma added water. Little guy stirred. Quite an undertaking, don’t you agree?

Little Guy carefully toddled Daddy’s cup to him. He was proud of himself as evidenced by the look on his face. He even successfully delivered Grandpa’s lemonade to him. We decided to drink ours on the front porch swing. When we finished, we brought the empty cups inside and put them in the dishwasher. It was time to retrieve cups from Daddy and Grandpa. They hadn’t finished theirs yet. He made sure they did before he took their dishes.

Their visit was coming to an end. As Daddy and Little Guy left, they sang a hymn for us. How beautiful it was to hear Little Guy sing with gusto. I was wondering just how much of those big words he understood. No matter, he was with his daddy, he had had a good afternoon with Grandma, and he was going home to his brothers and sisters. Grandma went back to her paperwork with a renewed sense of purpose after Little Guy’s visit with his daddy.

Join A Cup of Devotion today!