Swinging his lasso gently, rhythmically, the Master Cattle Driver followed the cows along the fence. He was in our field to rope a bull calf that needed special attention for his well-being. First words out of his mouth were, “I am not in a hurry today. I’ve got as much time as it takes to get the job done.” Back and forth they went. His eyes riveted on the 8-day old calf that had out-smarted and out-run Nathan and me many times over the last few days. 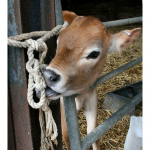 Whoosh! He swung his rope only to miss the calf. Pacing continued. Looked like another good opportunity, but no. Come on little guy, he knows what’s best for you. Stop evading him.

In the days prior, Nathan had taken his quad out creating quite a ruckus in the field. Nervous energy swept through the field for boy and cow alike as he tried to force the calf into the barn. I began to think that a freezer full of veal would be a good idea. Then we decided to open the barn door, entice the cows with food (the only valuable in cattle economy), wait, then surprise them, trap them, slam the door, and carefully release the others until we had only the bull calf. The Master Cattle Driver told us that had we accomplished our plan, the best we could have hoped for would be that Mama Cow would have ruined the barn door in an attempt to rescue her bellering calf. The worst for us would be death as she would trample us down and knock us around in the field.

He swung his lasso again and again but that slippery little calf continued to wile away. He never tired. Was never discouraged. He patiently followed the herd with his eye focused on the calf. Waiting for the perfect opportunity. Sometimes the cows took a different path through the field. Other times they decided to stop and eat.

After a while, the Master considered incorporating some of the other resources he had available–cattle panels (to create a temporary ‘hallway’ for them to walk through, thus forcing the calf into position), his trained cattle dogs to herd them, or his horse so he could more easily watch the calf from a different perspective–a higher stance.

Back to the feed trough the herd went. The Master’s eyes and hands fully focused on the one calf for that was his reason for coming to our field. Round and round the lasso went. Finally, at just the right moment, he released it, caught the calf, let it run a bit, then dragged him to the birthing stall–a pen consisting of five 4×6 horizontal boards attached to 4×4 posts about 4 feet high. Nathan and I did not even consider doing the job in the birthing stall for fear of Mama’s wrath. The Master knew better. He fought a bit but then surrendered. He never bellered. Mama Cow watched the entire ordeal. She didn’t like it but she sure had no intention of harming the Master. For she had learned a proper fear of him. Indeed, the Master Cattle Driver did out-smart that slippery calf. The calf will never understand that he does indeed owe a long, healthy life to the Master.

As I reflect on the event, I realize that all too often, like the bull calf, I do everything I can to evade the Master’s hand in my life. So quick to wriggle away. Like Nathan and me, I think my way of doing things makes such good sense. How foolish for we have had the cows only a couple of years. The Master who created me knows so much more than I do.

Lord, may I submit to you in the first place for Your ways are gentle. Your yoke is easy and Your burden light. I pray You don’t have to put the dogs on my trail to work in me what You are designing as You hold me in Your hands. Thank you for Your patience though I often fight for my own way. May I grasp what You showed me today through the Master Cattle Driver and the calf.